Home » TYPES » Trees » Nicotiana glauca
Back to Category Overview
Total images in all categories: 12,081
Total number of hits on all images: 7,379,037 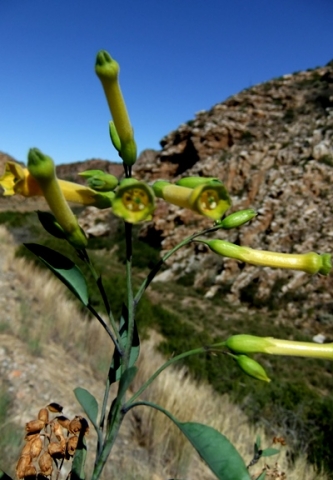 Nicotiana glauca, in Afrikaans commonly known as jantwak (John tobacco), is an exotic, a declared weed in South Africa, obliging landowners to eradicate it when found on their properties. It is a slender shrub or small tree up to 6 m tall and toxic to people and livestock.

The small seeds drop early, ready for action as they germinate easily, the saplings persistent.

This plant has spread widely from northwest Argentina and Bolivia across the Americas, Africa, Asia, southern Europe, Australia and New Zealand. In some parts of the world it was planted as a garden ornamental but escaped and became unpopular as a weedy nuisance.

Introduced into South Africa deliberately to bring trees to some arid, inland parts in 1845, it does provide a little shade but has done more than that as invader.