Home » TYPES » Trees » Nuxia congesta ready to flower
Back to Category Overview
Total images in all categories: 11,912
Total number of hits on all images: 7,163,186 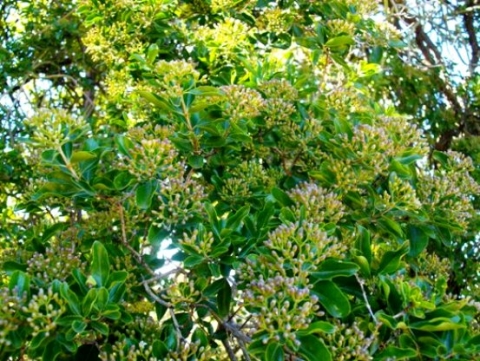 This tree was photographed on a southern slope of the Magaliesberg, ready to burst into flower in June, the middle of the tree's blooming season. This is also one of the indigenous trees still seen in protected nature areas of Johannesburg.

The species distribution ranges from the southeast coast in the Eastern Province, through KwaZulu-Natal to Mpumalanga, Limpopo and North West, as well as in tropical Africa. It commonly grows in rocky kloofs, grassland, evergreen forests and forest margins at low to medium altitudes. Large trees of this species are typically found in wooded ravines.

The small, fragrant flowers grow in dense, many-flowered heads, coloured white or tinged with mauve. The buds form long before they open in winter, waiting for the right moment, as the promising inflorescences in the photo are doing. The specific name, congesta, is derived from the congested appearance of the flat or rounded flowerheads.

The fruit is a small (3 mm long), many-seeded capsule that has a hairy surface and is almost enclosed by the calyx lobes.

The wood of N. congesta has a pale yellow colour. Although it is hard, it is not put to much use, save as firewood and fence posts.

This species is not considered to be threatened in its habitat early in the twenty first century (Coates Palgrave, 2002; Schmidt, et al, 2002; www.redlist.sanbi.org).