Home » TYPES » Trees » Nuxia floribunda
Back to Category Overview
Total images in all categories: 12,087
Total number of hits on all images: 7,393,083 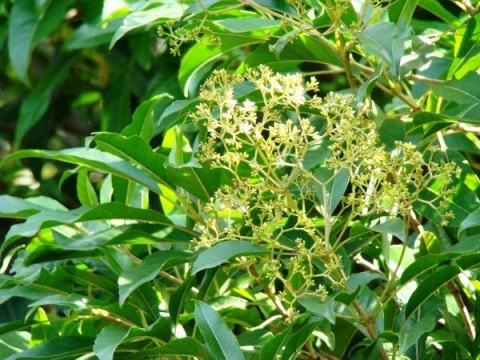 Nuxia floribunda, the forest elder, is a small to medium-sized tree with a shapely, spreading crown. It commonly reaches heights around 3 m to 10 m, occasionally 25 m (SA Tree List No. 634).

The bark of N. floribunda is pale grey, smooth or rough and flaking, young branches angular and purplish with raised leaf scars. The leaves are opposite or in whorls of three, simple and tapering to their tips, with entire, wavy margins.

The species distribution ranges coastally from the east of the Western Cape through the Eastern Cape to KwaZulu-Natal and inland to the Mpumalanga and Limpopo Lowveld. It also grows in tropical Africa.

The habitat is evergreen forests and forest margins. The tree is frost and drought sensitive. The species is not considered to be threatened in its habitat early in the twenty first century.

The hard wood was in the past used in wagon building. The tree is a good garden subject, insects and birds visiting in the flowering season. Leaves are browsed by livestock and game (Coates Palgrave, 2002; www.plantzafrica.com; http://redlist.sanbi.org).