Home » TYPES » Trees » Nicotiana glauca shrub
Back to Category Overview
Total images in all categories: 11,905
Total number of hits on all images: 7,155,942 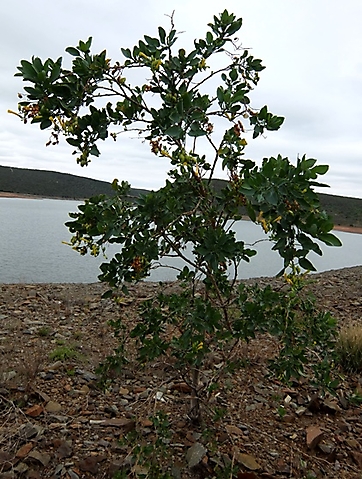 Nicotiana glauca is usually more shrub than tree. It forms colonies in its native Bolivia and northwest Argentina, also doing that in the disturbed soil, dry places to which it has escaped in many parts of the world. One of those is South Africa, where it has been growing since the middle of the nineteenth century.

The attractive flowers brought about N. glauca’s introduction as a garden species, while in other parts the need for shade trees made it welcome, when wariness about foreign species invasion was still low. The seed set, germination and survival of saplings of this tree are high, though never in wet areas.

So, the unintended consequences of the human boost to the plant’s distribution that followed were all multiplied easily by the plant itself (Curtis-Scott, et al, 2020; Jeff Ollerton, et al, 2012: Pollination ecology of an invasive tree tobacco Nicotiana glauca: Comparisons across native and non-native ranges. Journal of Pollination Ecology, 9(12), pp 85-95; Shearing and Van Heerden, 2008; Coates Palgrave, 2002; Van Wyk and Van Wyk, 1997).