Home » TYPES » Shrubs » Syncolostemon canescens
Back to Category Overview
Total images in all categories: 11,037
Total number of hits on all images: 5,688,354 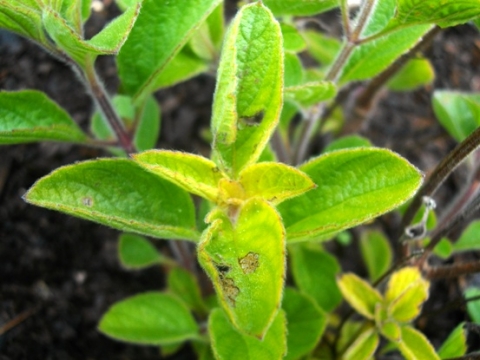 Syncolostemon canescens is an erect, aromatic perennial, woody only at the base where it branches. It grows into a rounded shape reaching heights around 60 cm. The generic name is derived from the Greek words syn meaning united, kolos meaning stunted and stemon means stamen, referring to the joined lower stamens.

The aromatic leaves are opposite and short-stalked. The leaf-shape is ovate-lanceolate tapering to obtusely pointed tips. The leaves become up to 5 cm long, often densely hairy, the margins coarsely to variably toothed.

The inflorescence may be branched, up to 25 cm long and above the leaves. The small, tubular flowers grow in spaced rings of four to six above small floral bracts. The corolla may be white, pink, lilac or violet. The tube is 1,2 cm long with stamens exserted over the lower lip. Flowering happens in summer to after midautumn.

The large species distribution in South Africa includes the provinces north of the Vaal River and the north of KwaZulu-Natal. The plants also grow in several neighbouring countries.

The habitat is open and semi-arid woodland, rocky grassland and watercourses. The species is not considered to be threatened in its habitat early in the twenty first century.

The species was moved with the rest of the genus Hemizygia into Syncolostemon, which is represented in South Africa by about 40 species (http://pza.sanbi.org; www.zimbabweflora.co.zw; http://redlist.sanbi.org).