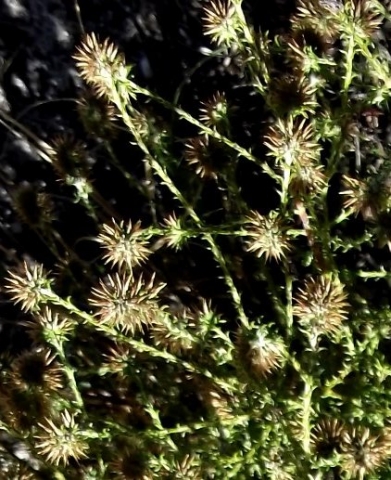 Stoebe incana is a grey-woolly, rounded shrublet growing to heights from 30 cm to 60 cm. Its name may have been changed to Seriphium incanum but this is not clear. Earlier it was known as Stoebe leiocarpa.

The generic name is derived from the Greek word stoibe that means a stuffing or filling up, on account of the plants having been used for packing wine jars and making brooms.

The species distribution is in the south of the Western Cape from the Cape Peninsula to around Calitzdorp. The photo was taken in Fernkloof at Hermanus at the end of February.

The habitat is rocky sandstone slopes and flats. The species is not considered to be threatened in its habitat early in the twenty first century (Bond and Goldblatt, 1984; Andrew, 2017; iNaturalist; http://fernkloof.org.za; http://redlist.sanbi.org).