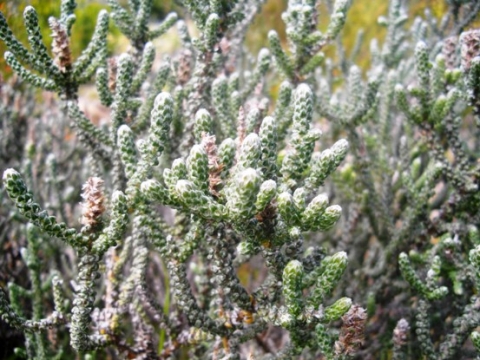 Stoebe muirii is a spreading shrub with small grey leaves, woolly on their upper surfaces. Stoebe leaves generally are hairy on top, while Helichrysum leaves are hairy all over or below. The unusual pattern formed by the reflexed leaves on the well-covered stems can be seen in this photo.

The plant has pink florets, causing the species to remain in the Stoebe genus during a recent reorganisation and not be moved to Seriphium, as happened to species with other than white or pink coloured florets. There is only one tiny disc floret with five lobes per capitulum. The capitula or flowerheads are clustered into inflorescences at branch ends. Flowers are mostly seen in mid-autumn.

The species distribution is small, limited to parts of the southern coast of the Western Cape from Bredasdorp to Stilbaai.

The habitat is limestone fynbos and strandveld, also disturbed land like road reserves. The species is considered to be vulnerable in its habitat early in the twenty first century (Bond and Goldblatt, 1984; www.plantzafrica.com; http://redlist.sanbi.org).