Home » TYPES » Shrubs » Stoebe alopecuroides
Back to Category Overview
Total images in all categories: 11,131
Total number of hits on all images: 5,810,018 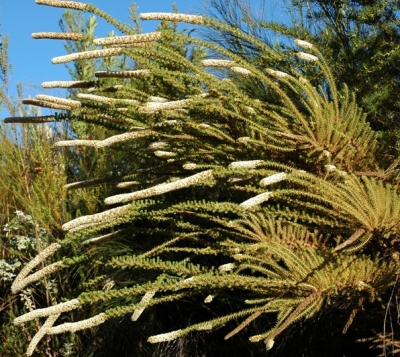 Stoebe alopecuroides, the cat's tail snakebush grows to 1,5 m. The leaves are small, narrow and hard.

Small, white, daisy-like flowers clustered densely at the ends of branches are produced during late winter and spring.

This is a common shrub found along the southern Cape coast in the east of the Western Cape and the west of the Eastern Cape from Riversdale to Uitenhage and inland into fynbos parts of the Little Karoo.

The habitat is mountain slopes of forest margin and moist, sandstone fynbos. The species is not considered to be threatened in its habitat early in the twenty first century (Vlok and Schutte-Vlok, 2015; http://redlist.sanbi.org).