Home » TYPES » Shrubs » Syncolostemon obermeyerae
Back to Category Overview
Total images in all categories: 11,528
Total number of hits on all images: 6,614,455 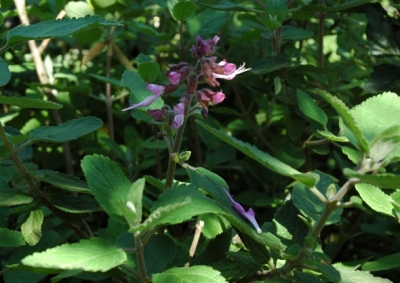 Syncolostemon obermeyerae, commonly known in Afrikaans as the Soutpansbergsalie (Soutpansberg salvia), is a branched, hairy shrub of the sage family.

The pleasantly aromatic leaves are short-stalked and ovate in shape, varying in width with rounded to pointed tips. The margins are toothed. The veins are sunken on the midgreen to dull green upper surfaces. Leaf dimensions are up to 6 cm long and 3 cm wide.

The plant produces many small, tubular flowers that are two-lipped. The corolla is mauve to pink. Flowering happens during summer and continues to midautumn.

The species distribution in South Africa is only in parts of Limpopo from the Soutpansberg to the Abel Erasmus Pass in the Northern Drakensberg.

The habitat is high summer rainfall grasslands, rocky slopes and forest margins where the plants grow in acidic, quartzitic, sandstone soils at elevations ranging from 1400 m to 1800 m. The species is not considered to be threatened in its habitat early in the twenty first century.