Home » TYPES » Shrubs » Stoebe capitata
Back to Category Overview
Total images in all categories: 11,276
Total number of hits on all images: 5,987,751 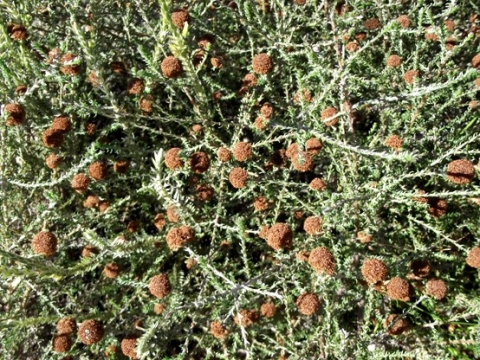 Stoebe capitata is a tangled shrublet, erect or spreading, reaching heights from 30 cm to 50 cm.

The needle-like leaves are twisted and sessile (stalkless), sometimes broader at the base on the stem than the thin blade higher up. Blooming is at its end on the bush in picture, the flowerheads turned brown.

The species is distributed in the south of the Western Cape from the Cape Peninsula northwards to Piketberg and the Cederberg, eastwards into the coastal parts of the Eastern Cape as far as Humansdorp. The photo was taken in Fernkloof at Hermanus at the end of February.

The plants are found on lower sandstone slopes and coastal flats, often in disturbed areas. The species is not considered to be threatened in its habitat early in the twenty first century (Manning, 2017; Bond and Goldblatt, 1984; iNaturalist; http://redlist.sanbi.org).