Home » TYPES » Shrubs » Tephrosia grandiflora
Back to Category Overview
Total images in all categories: 11,506
Total number of hits on all images: 6,503,255 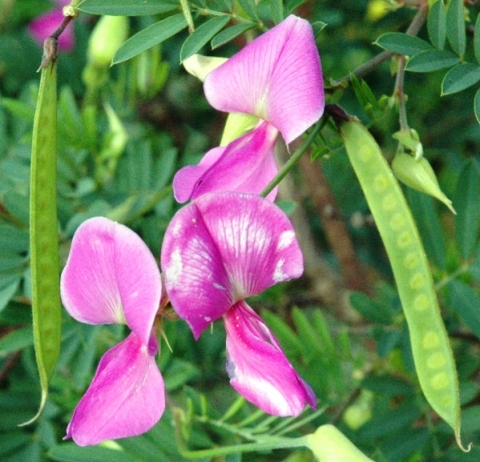 Tephrosia grandiflora, commonly known as the pink bush pea, is a short-lived shrublet of the Fabaceae family reaching heights from 30 cm to 1,5 m.

The leaves of T. grandiflora are pinnate, the three to five pairs of oval leaflets many-veined. There are small leaf stipules pressed against the stem.

The inflorescences grow on long stalks, the calyces silky. The flowers are pink or magenta, blooming at winter’s end and in spring. The pods are about 3 cm long and 8 mm wide.

The species distribution is along the Eastern Cape and KwaZulu-Natal coastline and maybe inland in eastern Mpumalanga and Limpopo. The habitat is woodland and forest margins. The species is not considered to be threatened in its habitat early in the twenty first century.