Home » TYPES » Shrubs » Tetradenia riparia
Back to Category Overview
Total images in all categories: 11,506
Total number of hits on all images: 6,503,350 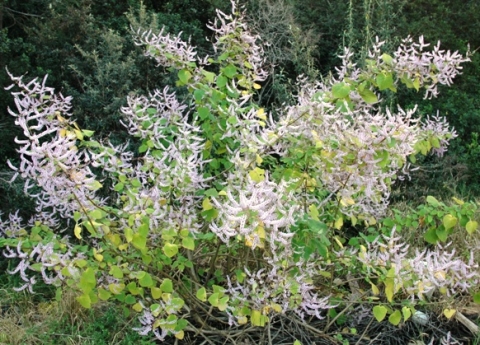 The plant is dioecious, i.e. male and female flowers occur on separate plants. Propagation from cuttings is, however, so easy that one hardly needs both plants to obtain seed for proliferating garden plants.

The male and female flower spikes differ in length, the female one being up to 2,5 cm while the male spike may become 8 cm long. Flowering occurs before the spring leaves, from midwinter to September.

The species distribution is in South Africa’s north-east, in KwaZulu-Natal, Mpumalanga, Limpopo and Gauteng, as well as in some neighbouring countries.

The habitat is forest margins, grassland and stream-banks. The species is not considered to be threatened in its habitat early in the twenty first century.

This is a popular garden plant for warmer climates, growing well in both semi-shade and full sun. It does better when well watered (Schmidt, et al, 2002; Coates Palgrave, 2002; http://redlist.sanbi.org).