Home » TYPES » Shrubs » Cymbopappus adenosolen
Back to Category Overview
Total images in all categories: 12,081
Total number of hits on all images: 7,379,267 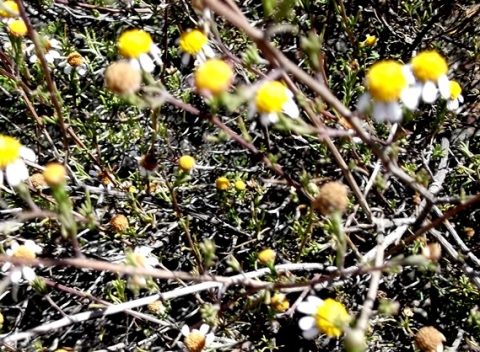 Cymbopappus adenosolen, previously known as Chrysanthemum carnosulum and Marasmodes adenosolen, is a branched shrublet in the Asteraceae family that grows from a woody rootstock, reaching heights from 20 cm to 60 cm.

The leaves are alternate and smooth, sometimes lobed. The leaf-shape is narrowly oblong, its dimensions 5 mm long and 2 mm wide.

The flowerhead has a central cluster of yellow disc florets that forms a shallow dome, accentuated by one surrounding whorl of somewhat reflexed, white ray florets. A flowerhead is about 1 cm in diameter. The plants flower in spring and summer.

The species is found from Ceres and Worcester into the western Little Karoo and the northern slopes of the Langeberg Mountains, as far east as Riversdale. This plant was seen near Montagu.

The habitat is dry clay soils in renosterveld. The species is not considered to be threatened in its habitat early in the twenty first century.

The other two species, C. hilliardiae (found in KwaZulu-Natal) and C. piliferus (found in Limpopo) are both considered vulnerable in nature (Vlok and Schutte-Vlok, 2010; Bond and Goldblatt, 1984; iSpot; www.redlist.sanbi.org).