Home » TYPES » Shrubs » Cycas thouarsii
Back to Category Overview
Total images in all categories: 11,912
Total number of hits on all images: 7,163,119 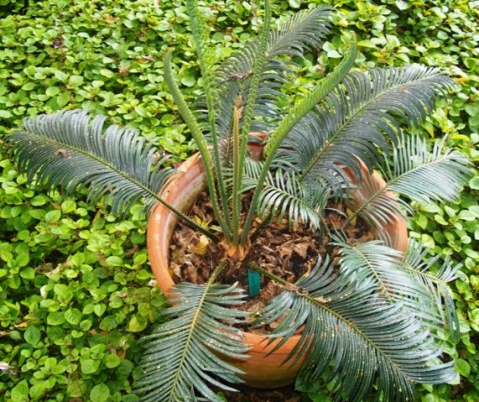 There are three families of cycads on earth, viz., Cycadaceae, Stangeriaceae, and Zamiaceae, all within a broad group of plant species, viz. the Cycadophyta. They are all gymnosperms or cone-bearing plants with naked seeds, as opposed to the angiosperms or flowering plants that started flourishing later.

Though cycads constitute a minor component of the plant kingdom today, they were extremely common during the Jurassic period. They have changed little since the time of the dinosaurs, compared to some major evolutionary changes in most other plant divisions.

In nature C. thouarsii is found in Madagascar and in tropical East Africa, as far south as Mozambique and also in Zambia. It grows faster and taller (10 m) than most other cycad species. The leaves are bright green, shiny, narrow and their leaflets have entire margins. The leaflets higher up on the rachis (closer to the leaf tip) are longer and softer, even droopy compared to the stiff pinnae of many Encephalartos species. The seeds are also large.

This plant is the oldest of the Cycas genus, about 140 million years and still living!  It is widely grown, best in light shade with ample moisture and good drainage. The species resembles C. rumphii.

This young specimen of C. thouarsii was photographed in the Botanical Garden of the North-West University at its Potchefstroom campus. If it grows well, the container may later have to be used for another beginner!