Home » TYPES » Shrubs » Cyclopia subternata
Back to Category Overview
Total images in all categories: 12,081
Total number of hits on all images: 7,379,156 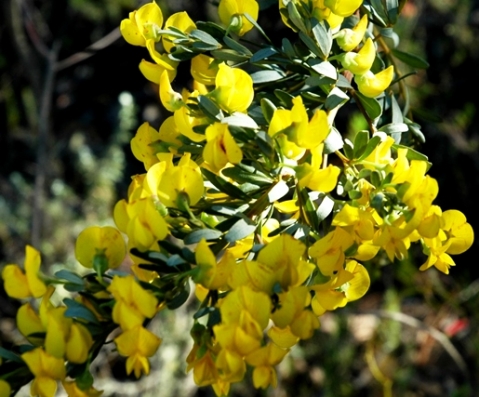 The C. subternata shrubs reach about 1 m in height. The leaves are three-foliolate, hairless, blue-green and lanceolate. The deep yellow flowers age to an orange or tan colour. Blooming happens in September.

The honey-bush tea species are all endemic in fairly small areas of the Western or Eastern Cape. About five of the species including C. subternata are used locally to make the traditional honey-bush teas that are increasingly popular among South Africans. C. subternata is distributed along coastal mountain ranges from the Langeberg to the Tsitsikamma in the southern Cape.

The habitat is full sun on sour fynbos slopes around sandstone seeps in high rainfall conditions. Overharvesting is damaging the natural populations bu commercial planting is on the increase in the region. The species does not resprout, therefore vulnerable to overharvesting. The species is not considered to be threatened in its habitat early in the twenty first century (Manning, 2007; Moriarty, 1982; http://redlist.sanbi.org).