Home » TYPES » Shrubs » Diastella proteoides
Back to Category Overview
Total images in all categories: 11,506
Total number of hits on all images: 6,503,117 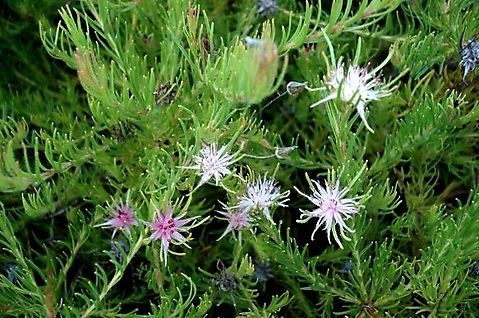 Diastella proteoides, commonly known as the flats silkypuff and previously scientifically as D. ericaefolia, is a creeping shrublet growing lax branches. It spreads in mat-forming fashion to 3 m in diameter but only 30 cm in height, or 50 cm with some help from surrounding vegetation.

The species distribution in the southwest of the Western Cape is small, from Paarl and Mamre to the Cape Peninsula, by now mainly reduced to Tokai and Plattekloof near Monte Vista.

The habitat is sandy flats. The species is considered to be critically endangered in its largely devastated habitat in the urban and highly developed area of the Cape (Manning, 2007; Bond and Goldblatt, 1984; http://pza.sanbi.org; http://redlist.sanbi.org).