Home » TYPES » Shrubs » Cyclopia genistoides
Back to Category Overview
Total images in all categories: 12,061
Total number of hits on all images: 7,359,854 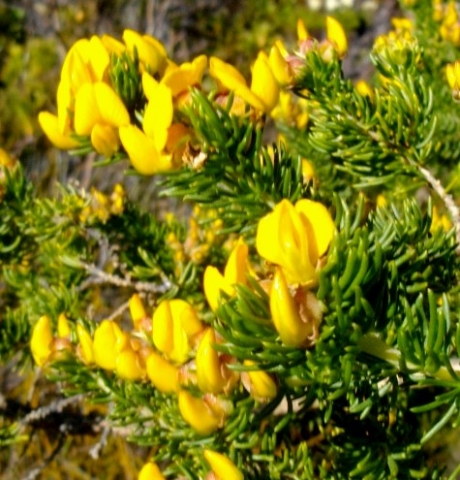 Cyclopia genistoides, commonly known as honeybush tea, is a rounded, resprouter shrub reaching 2 m in height. The about hairless leaves are trifoliolate, the needle-like leaflets with margins rolled under. Leaflets become 8 mm to 30 mm long and 1 mm to 2 mm wide.

Stem-tip clusters of yellow flowers grow from leaf axils, one per leaf. There is sometimes some red inside the base of the banner or standard petal. The stamens are free. The flower is about 1 cm to 1,5 cm long. Flowering happens from midwinter to early summer. The pod bears several seeds.

The species distribution is in the south of the Western Province, from the Cape Peninsula to around Albertinia. The plants are found on lowland fynbos flats and slopes to 160 m, sometimes in seasonally marshy places.

The species is considered to be near-threatened in its habitat early in the twenty first century due to overharvesting (Manning, 2007; Bean and Johns, 2005; www.redlist.sanbi.org).