Home » TYPES » Shrubs » Dianthus micropetalus
Back to Category Overview
Total images in all categories: 12,081
Total number of hits on all images: 7,379,215 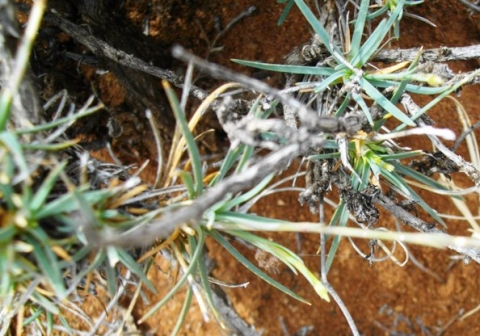 The leaves of Dianthus micropetalus are arranged in tufts at the base of the low growing woody shrublet. Branching allows for many tufts to form on one plant, as on the one in the photo. They are blue-green in colour, narrowly linear, appearing grass-like. In Afrikaans the plant is called grashout, meaning grass wood.

The species distribution is in the southern and western parts of South Africa. The plant is grazed by livestock and game in its habitat of summer rainfall rocky ridges. The species is not considered to be threatened in its habitat early in the twenty first century (Shearing and Van Heerden, 2008; http://redlist.sanbi.org).