Home » REGIONS » Biedouw Valley » Moraea serpentina flowering on short rations
Back to Category Overview
Total images in all categories: 11,506
Total number of hits on all images: 6,494,293 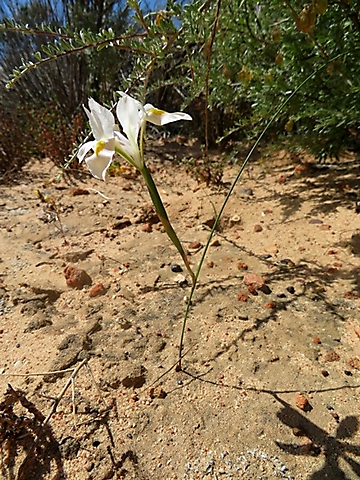 Moraea serpentina grows a few, short-lived flowers on a stem that is often branched in thriving plants. The cormous underground part of the geophyte is perennial, while all that is visible above-ground is replaced annually with winter rain. This minimal plant is making it on hard, bare ground in the Biedouw.

The white flowers usually have variable yellow markings on their lower three tepals. There is sometimes pale blue on the three style branches grown together with the filaments of the stamens in the corolla base (Manning, 2009; Le Roux, et al, 2005; iNaturalist; www.pacificbulbsociety.org).