Home » REGIONS » Biedouw Valley » Lapeirousia fabricii
Back to Category Overview
Total images in all categories: 11,506
Total number of hits on all images: 6,494,273 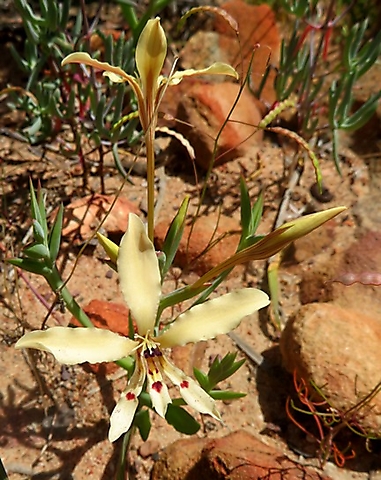 The tepal margins are wavy, in some parts crisped in open flowers. The smaller, lower tepals have somewhat heart-shaped dark red markings and are slightly paler cream than the unmarked upper three. The long corolla tubes are darker on the outside than on the spreading, cream lobe insides and lined, particularly in their central parts.

The branched style is visible over the flower centre, the blackish anthers immediately below them.