Home » REGIONS » Biedouw Valley » Massonia bifolia not often seen
Back to Category Overview
Total images in all categories: 11,506
Total number of hits on all images: 6,515,816 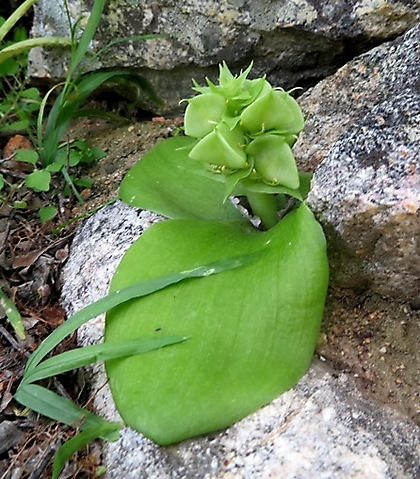 Massonia bifolia is fond of perching on or among rocks, here also under bushes, shade being important in its life.

Whether there are herbivores that will nibble these lush green parts set among rocks, remains to be seen; probably by nobody apart from the perpetrators.

It pays to have rock-hard and tough-branched associates who offer a modicum of (free) protection where there is so little to keep living bodies safe, particularly leaves. Legal rights are non-existent in plant world.

If you are soft and slight, hide, but never forget to attract your pollinators. This is the delicate and precarious balance of living in the real world, but above all, living. Or regenerate all vital parts, if not whole bodies in large numbers; unless spines, hairs or repellent chemicals can be produced from the genetic endowment, avoiding total consumption by something or somebody.

Never underestimate the searching persistence of hungry vertebrates. They are enabled by agility in negotiating rocky obstacles and crawling under dense vegetation, right into this here clearing for accessing your private parts! Some photographers clearly manage the same.

The herbivores will come, sniff, taste and possibly eat. Every conceivable plant taste and aroma is acquired by some animal, as competition helps to fill all gaps in the extensive market of edible entities, i.e. whatever lives. Uneaten plants are tomorrow's niche diets of new animal species or newly adapted ones, emerging into the living arena for giving every edible species its challenge to breed. Whatever is not on its toes is a candidate for extinction.

Then there are still the myriad of insects that can fly to be fed, or crawl, or slide...

For the moment all is well with the M. bifolia occupants of this apparently lonely spot in the Biedouw Valley bush during September. And if they are eaten, the perennial, subterranean parts of these geophytes have a good chance of repeating the above-ground growth seen here next year, when the insects may not arrive in time.

It is more than hope that keeps nature going. Life in all its forms doesn't hope, it does what it must to remain extant in as many forms as possible for beating the odds.

Life as a collective invariably performs all its living actions unwaveringly, the no holds barred utilisation of all opportunities and all resources. All the countless life forms also fight each other to preserve themselves, unless a compromise is found for mutually beneficial survival in an ecological niche.

Life consistently meets the inorganic world's challenges, sacrificing untold specimens as its foot soldiers. This is a continuous multispecies exercise with forgotten beginnings and no clear end in sight. In most parts of the universe life doesn't exist (yet), but we have learnt that it always pushes ahead over all frontiers reached so far, to the best of its ability.

So we can conclude that as hard as life fights to continue in any form possible on earth having started here as far as we know today, as hard it should be expected to toil, if and when starting somewhere else in the universe where conditions allow. Different workable conditions may spawn different types of life, generating unique mixes of species on different planets, satellites, comets or asteroids.

Maybe life in its different starting points might be incompatible with each other, should they ever meet. We may like our Covids better, once something from outer space arrives, but who knows?

Nature comprises the growing and expanding organic world, as well as the so much bigger, older inorganic world. Things happen everywhere in all parts of the universe in terms of all sorts of dynamics, for what we know sometimes without rhyme or reason, where life is concerned through natural selection.

The mind-exceeding cosmic activity and its untold possible outcomes that unfold continuously, have much more time and options than the earth or what lives on it, or even in our galaxy. The aggregate of all world-shaping events bring inconceivable possible futures to living things, whichever branch(es) of the overall extant families and their equally inconceivable species ranges happen to be opportunely positioned for the challenges to come.

Homo sapiens is one small option among many possible players, or the only one, but unlikely. Who knows, but watch this space. Even on earth life strives in all its extant ranks, not in a preferred few, as domination has in the past shown itself to change dramatically with conditions.

What we do know is that life always performs in top survival mode, whether carried by few or by many species or even specimens through any crisis; and crises it has had! Every current-time, best positioned set of carriers of life, the links in life's chain during intermittent mass extinctions, may be quite a small nexus between succeeding boomtime's rich, biodiverse "seasons" of millions or even billions of years and millions of species.

And death is forever so near, closer than death's door (that never existed), ready to weed out the non-competitors from life's race in avoiding overall extinction (Leistner, (Ed.), 2000; Le Roux, et al, 2005; iNaturalist).