Home » REGIONS » Biedouw Valley » Imagine what this place is good for
Back to Category Overview
Total images in all categories: 11,506
Total number of hits on all images: 6,494,369

Imagine what this place is good for 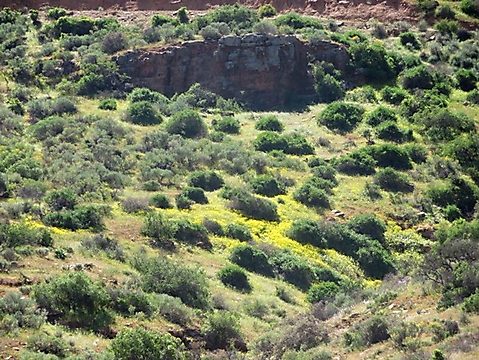 Imagination in limited doses rarely kickstarts weird thought. It gathers little mental momentum, no matter the allure in the stimuli presented. A rock is simply a rock, whatever else could it be?

To the geologically trained eye the stone reveals more, all in hard fact or prevailing theory form, or questions for exploration in a disciplined context. The magical moments of life in science are missed by those deeming it a prosaic field.

For those, on the other hand, blessed (or cursed) with extravagant image conjuring tendencies, the spawn of such a rockface may be rich. It is not silent at all in eliciting responses from people of a very different ilk. These are the movers and shakers in whom the roots of not only science, but also conventional reality had been (at least partly) drowned early in seas of make-believe. Untested reality of the moment is spun smoothly and woven into stories that defy or expand the universe for warming the hearts of the susceptible.

Secret treasure cave doors with open sesame keys are passé these days. Godly (or devilish) rock faces blink at eyewitnesses, just watch! Babes in the wood observers, those suggestible transporters of myths to their natural storage places and survival chambers, don’t fail to do their ground-breaking rounds in adding lavishly to the narrative of humanity. Incorrigible charlatans will add the components for turning it all lucrative.

Human history is punctuated with tales of bizarre rituals taking place in localities such as this. The inhabited earth is dotted with known and forgotten shrines, even serial ones in the same “magical” spot over time, sometimes unrelated to each other in dogma offered. The setting just remained so pregnant with the right mind-bending features that would-be gurus couldn't resist. Off-beam and fringe mind games get lost over time, neither surviving in mainstream thought, nor accumulating incrementally as scientific knowledge does.

Fantasy rituals and their enacted sequels may involve midnight, the full moon, dancing in full regalia, shaman leadership and novice angst or willing wonderment. Imagine gnomes, sprites, hobgoblins and trolls pouring from secret gateways in the rock by night or day, prancing gaily over the yellow snow flower carpet in the glen, without really touching it.

Only the chosen can traditionally see and hear them, so these are private and exclusive gatherings from which materialism and other mundane things, as well as their creators, are banned.

Nobody needs to go this far, of course, but reality checks never rid the mind completely of self-made meaning, metaphysics or myth. As the love among people takes many forms, the love of nature acquires its explicit and implicit imagery and symbols like temple furniture, some of it shared. These may be augmented into mind games (or compulsions) taking lives of their own, close to or far removed from the generally shared components of reality.

This all may make some greenies appear funny. Nature serves the escapist best by inducing sensations of serenity in a largely blank mind, eyes staring into a (green) middle distance. Or the experience of nature may become a private, unique sign-posted road of internalised peak moments, mentally stored in some detail, a personally valued communion with the Great Mother.

Or something goofier, for neither science nor the open-ended growth of imagination-driven narrative will give way in the endeavours of the species.