Home » REGIONS » Biedouw Valley » Prosopis, a bane and a boon
Back to Category Overview
Total images in all categories: 11,506
Total number of hits on all images: 6,491,705

Prosopis, a bane and a boon 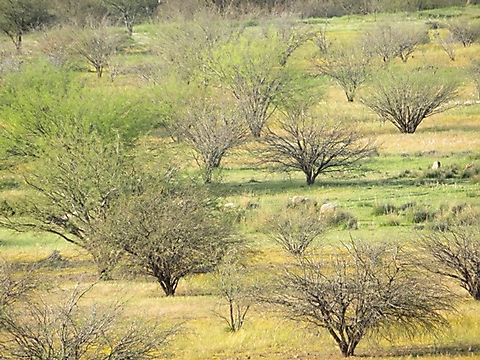 Prosopis is a genus of exotic Fabaceae shrubs and small trees originating from the warmer parts of the Americas. Commonly known as honey mesquite or Duitswesdoring (German West, i.e. Namibia thorn), they were planted in South Africa and Namibia to provide fodder, shade and firewood in the tree-scarce, arid parts. Prosopis honey is an additional benefit.

As it happened, they became serious invaders along the rivers, water courses and drainage lines of the arid and semi-arid inland across several provinces. The photo was taken on a Biedouw Valley farm.

Some of the about eight species of Prosopis introduced locally are now declared invaders and may no longer be planted. Eradicating them or even limiting their invasive tendencies presents a huge challenge. The Prosopis species hybridise among each other, sometimes making specific identification hard.

Multistemmed and armed with paired, straight spines at the nodes of the red-brown branches, the trees are somewhat resembling of local thorn trees; often found where Vachellia karroo also grows. Young stems are usually hairy. The leaves are bipinnate.

The yellow flowers grow in spikes. The slender pods are constricted between seeds, straight or curved, depending on the species. Although the pods become woody they constitute the fodder component (Coates Palgrave, 2002; Van Wyk and Van Wyk, 1997).