Home » REGIONS » Biedouw Valley » Pelargonium magenteum in habitat
Back to Category Overview
Total images in all categories: 11,905
Total number of hits on all images: 7,155,981 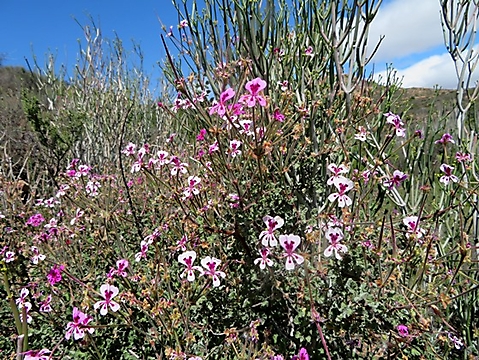 The single-stemmed Pelargonium magenteum shrub may be irregularly shaped and straggly, given the physical features of the micro-neighbourhood in which it grows up. (Plants do grow up, surely, even more consistently than children, given their commitment to a fixed spatial position in the world.)

It is not really a scrambler. This plant takes liberties in leaning on passive neighbours and conceal some of their parts for long or forever. Many plants do this. And live with such burdens being put on themselves.

The smallish, grey-green leaves are plentiful on the persmalva bush (as it is locally known), more so than the also abundant flowers appearing above them in season.

The two-tone magenta-purple corollas age to white in their peripheral parts, around the deeper coloured central blotches that don’t lose colour before shrivelling (Manning, 2007; Manning and Goldblatt, 1997; iNaturalist).