Home » REGIONS » Biedouw Valley » Is over there the same?
Back to Category Overview
Total images in all categories: 11,506
Total number of hits on all images: 6,494,256

Is over there the same? 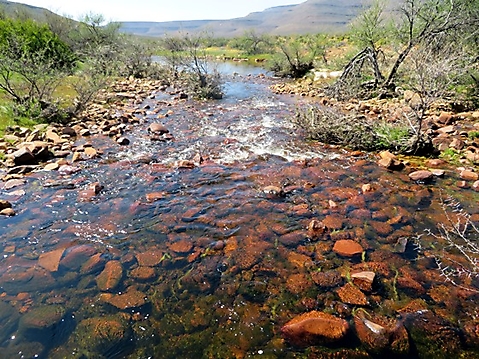 White water churned by riverbed stones in a fast-flowing river may be too shallow for rafting. It will still warm the hearts of nearby farmers who sometimes have to wait for rain for longer than their crops can endure.

Green slimy stuff in the foreground tells of life under water. Ecosystems comprise diverse life forms, are maintained (and developed) from the interdependencies among all the organisms present. Each such system has a reach in space and time, an impact on its home ground and water, shaped by the interaction among any number of neighbours, irrespective of differences in their appearance, size and functioning. The habits and needs of all the local species combined creates the uniqueness of each spot.

The Biedouw River has many features similar to other rivers, but like every river, a few things shaping its identity, its claim to uniqueness. And no two people notice exactly the same features, share fully the same experiences. Just look at the photos they bring back.

No wonder there is wanderlust in so many people. The uncanny pull of faraway places lies in the intuitive expectation that life is different there, that going there will make a difference to the life of the visitor. The cliché of uniqueness among universal patterns, the laws of nature remains a miracle that never bores, as long as the curiosity level is up to scratch.