Home » TYPES » Orchids » Ceratandra atrata
Back to Category Overview
Total images in all categories: 12,081
Total number of hits on all images: 7,379,231 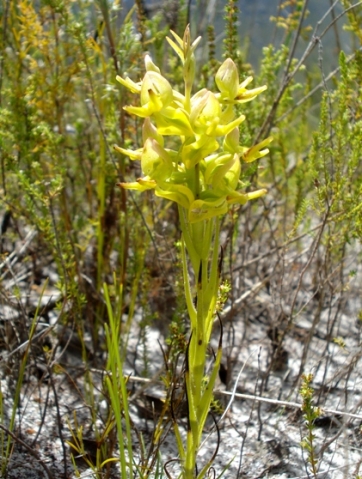 Ceratandra atrata, the shield orchid, is a tuberous perennial that grows a fleshy stem to heights of about 35 cm. Ceratandra plants have clusters of thickened, furry roots and narrow, ascending leaves scattered up the stem. There is usually a single, erect stem, although not always, as an additional basal leaf cluster may be present, as well as clusters of stems flowering concurrently, grown from interconnecting stolons.

The leaves ascend closely up the stem on all sides as the early recorded description of this plant (in Latin) had it. The numerous leaves upon the stem (cauline) have marginal fringes of hairy projections (ciliate) and taper to acute tips.

All six the Ceratandra species are endemic to fynbos in the south of the country, five of them in the Western Cape. C. atrata is distributed from the Cape Peninsula northwards to Ceres and the Cederberg, eastwards along the coast to beyond Mossel Bay, some say as far as Knysna.

The species is not considered to be threatened in its habitat early in the twenty first century (Liltved and Johnson, 2012; Manning, 2007; Bean and Johns, 2005; iSpot; www.redlist.sanbi.org).