Home » TYPES » Orchids » Bulbophyllum sandersonii
Back to Category Overview
Total images in all categories: 10,845
Total number of hits on all images: 5,498,978 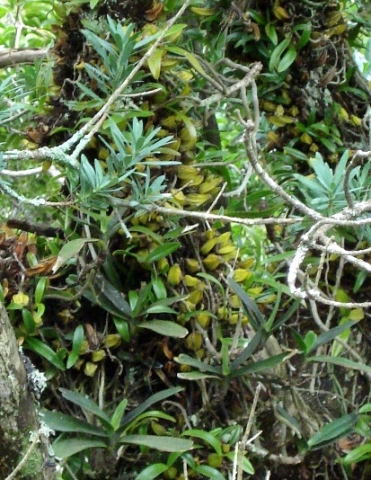 Bulbophyllum sandersonii is an epiphytic orchid growing to 10 cm from stout rhizomes.

The leaves are few, opposite in two ranks, growing from the tops of angular, ovoid pseudobulbs. The leaves are thin, oblong and channelled with entire margins and bilobed tips. They become from 4 cm to 12 cm long, from 1,5 to 2 cm wide.

The inflorescence is a short spike of 6 to 16 flowers growing from the side of the pseudobulb. The flowers are small, maroon or yellowish with velvety inner surfaces, sometimes with spots in the centre. The dorsal sepal is erect, the lateral ones taper. Flowering happens from mid-spring to early autumn.

The plant spreads on rocks and trees in riverine forests from the Eastern Cape to Limpopo in the eastern parts of South Africa and beyond the border into tropical Africa, widespread in central Africa. When a plant like this grows on a rock free from the earth it is called a lithophyte. The plant in picture is spreading under some yellowwood branch-tip leaves.

The species is not considered threatened in its habitat early in the twenty first century (Pooley, 1998; www.redlist.sanbi.org).