Home » TYPES » Orchids » Ceratandra atrata, let's do the twist!
Back to Category Overview
Total images in all categories: 10,366
Total number of hits on all images: 5,071,989

Ceratandra atrata, let's do the twist! 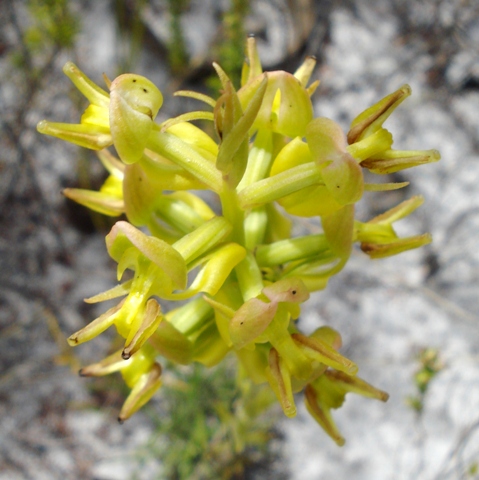 Seen from above, the Ceratandra atrata flower components noticed as protruding furthest away from the stalk are the pair of rostellum arms carrying the pollinaria.

Closest to the stems are the thick, oblong ovaries, columnar bodies in which the seeds will grow, covered in white and green striations in the photo. These ovaries are not twisted, projecting straight outwards, although one of those in picture has a suspicious, slight curve. C. atrata is one of the non-resupinate orchid species.

This means that when the developing flower of an orchid twists through 180˚ before it opens and positions the lip below, the median sepal above, it is called resupinate. Many orchid species are resupinate, while non-resupinate orchid flowers are not twisted. There are also orchids with flowers that twist through 360˚, presenting the flower in its original position, but with a major twist to its ovary.

The Ceratandra genus is inconsistent in resupination, three of its six species having resupinate flowers, the others not. Some orchids do, some orchids don't... (Liltved and Johnson, 2012; Manning, 2007; iSpot; Bean and Johns, 2005).