Home » TYPES » Orchids » Ceratandra atrata inflorescence
Back to Category Overview
Total images in all categories: 11,506
Total number of hits on all images: 6,499,266 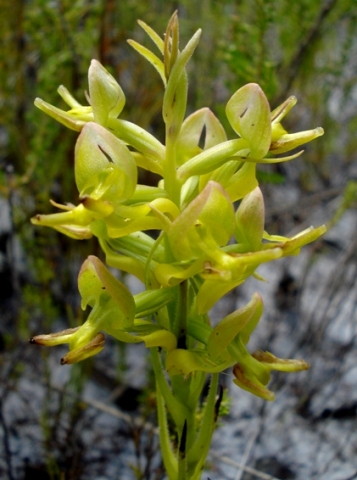 The more yellow than green flowers of Ceratandra atrata are borne at the top of a leafy stalk in a spike, varying in flower distribution density from compact to somewhat lax. C. atrata flowers are highly fragrant; they bear a lemony scent that may remain on herbarium specimens for years.

The leaves below and bracts between the flowers are narrow and erect with ciliate margins. The bracts are long, thin to almost needle-like and curving, emerging at the base of the ovaries and clasping them. Here they are visible beside some of the flowers in the photo.

The median sepal, about 12 mm long and 4 mm wide (positioned at the bottom of the flower), is narrowly elliptic to lance-shaped, the two lateral petals being attached upon its edges. These lower three flower segments curve back more in this specimen than is usually seen. The blooms appear from midspring to midsummer.

C. atrata is pollinated by a large bee, the oil-collecting Rediviva gigas. These dark bees resemble the smaller carpenter bees, but collect oil from flowers as well as nectar and pollen. They obtain this from oil-secreting callus glands upon C. atrata flowers. The glands are rubbed by the bees using their forelegs, whereupon the oil gleaned is moved to the insect's hind tibia for carrying away to the nest (Liltved and Johnson, 2012; Manning, 2007; iSpot; Bean and Johns, 2005).