Home » TYPES » Orchids » Cynorkis kassneriana
Back to Category Overview
Total images in all categories: 10,845
Total number of hits on all images: 5,499,028 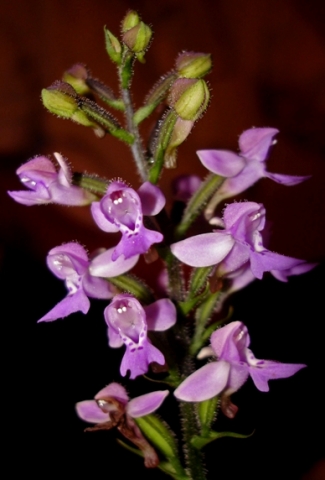 Cynorkis kassneriana is mainly a terrestrial orchid, although it may grow on trees and rocks, thus becoming an epiphyte and a lithophyte. The plant reaches heights from 15 cm to 44 cm. C. kassneriana had earlier names in its botanical history, including C. glandulosa and C. rupicola.

The Cynorkis genus comprises about 160 species in tropical Africa, Madagascar and other Indian Ocean islands. Only two species grow in South Africa, viz. this one and C. compacta, endemic to a small part of KwaZulu-Natal.

C. kassneriana produces one, sometimes two leaves at its stem base, growing from ovoid, hairy tubers that become 1,5 cm long. These leaves are olive green above and purple below. They are elliptic in shape and up to 20 cm long. Two or three smaller leaves occur higher up along the hairy stem of the plant and sheathing it.

The species distribution is widespread: from South Africa north of the Vaal River along the eastern parts of tropical Africa to Ethiopia. The distribution occurs at elevations from 1300 m to 2300 m.

The habitat is mainly forest floors or rocky seeps among decomposing plant material and shaded woodland where mosses often grow. The species is not considered to be threatened in its habitat early in the twenty first century (www.zimbabweflora.co.zw; www.africanorchids.dk; www.redlist.sanbi.org).