Home » TYPES » Orchids » Centrostigma occultans
Back to Category Overview
Total images in all categories: 12,081
Total number of hits on all images: 7,379,242 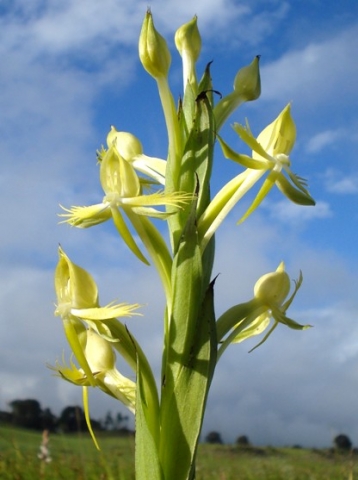 Centrostigma occultans is a terrestrial orchid growing leaves and flowers annually from ovoid-globose root tubers that may be smooth or sparsely hairy.

The genus is tropical African, comprising only three species. C. occultans used to be housed in the Habenaria genus in the past.

The species is distributed in Mpumalanga and Limpopo, but more widespread to the north of South Africa, as far as the DRC. The habitat is marshy grassland at elevations from 1200 m to 2100 m. This plant is not considered threatened in its habitat early in the twenty first century (Leistner, (Ed.), 2000; www.orchidspecies.com; www.redlist.sanbi.org).