Home » TYPES » Orchids » Calanthe sylvatica flowers
Back to Category Overview
Total images in all categories: 9,900
Total number of hits on all images: 4,598,398 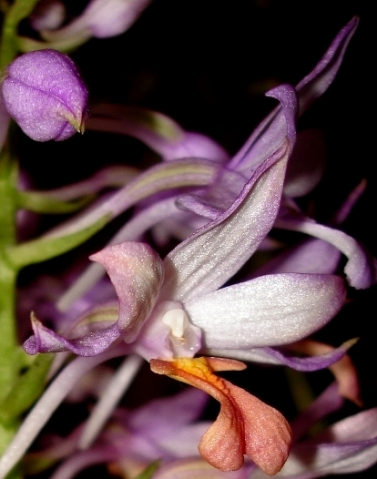 The flowers of Calanthe sylvatica are resupinate or twisted, borne in a somewhat lax raceme above the leaves. Tiny, narrow bracts subtend the flowers. The curved pedicel and ovary that form one structure are not green as so often seen in orchid flowers. Their colouring is similar to that of the sepals in the photo, with just one narrow band tinged green on the side.

The lip of a C. sylvatica flower, its most remarkable feature, is three-lobed. The central lobe is large, the lateral ones small, nearly oblong with rounded tips and pointing to the sides. The central, long lip lobe broadens to its tip, where it again splits into two secondary rounded lobes. There is more: The base of the lip has a yellow patch like a nectar guide upon it, covered in three ridges of fleshy protuberances.

The sepals and lateral petals are long, lance-shaped or ovate, tapering to pointed tips. They are paler coloured on their inner surfaces than outside. The lateral petals inside the sepals (and resembling them), are slightly shorter. The flowers are about 5 cm wide.

The spur at the back of the lip is slender and curved, about 2 cm long. The column is short and stout.

An almost uniformly purple bud is positioned above the open flower in the photo, waiting its turn.