Home » TYPES » Herbs » Commicarpus pentandrus
Back to Category Overview
Total images in all categories: 12,082
Total number of hits on all images: 7,379,616 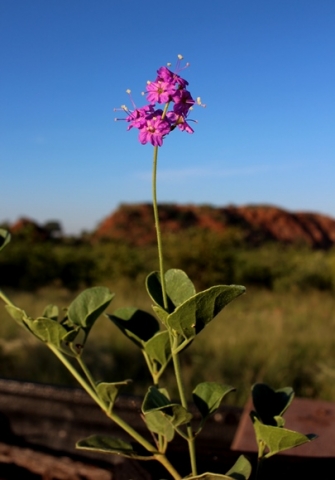 Commicarpus pentandrus, commonly known as cerise stars, in Afrikaans as veldpatat (field sweet potatoes) and scientifically previously as Boerhavia pentandra, is a robust perennial, that branches, forming wide mats or scrambling up supports to 2 m. The rootstock is thickened, 3 cm wide and 30 cm long, earning the plant the veldpatat name.

The long, slender stems are woody at the base, often tinged purple and hairy. Upper plant parts grow annually. The plant is palatable to stock and game.

The species is widely distributed in the summer rainfall eastern parts of South Africa, occurring in all provinces except the Western Cape.

The habitat is open grassland, forest margins and floodplains to elevations of 1400 m. The plants are often seen on bare patches. The species is not considered to be threatened in its habitat early in the twenty first century.