Home » TYPES » Herbs » Corymbium africanum
Back to Category Overview
Total images in all categories: 12,090
Total number of hits on all images: 7,393,103 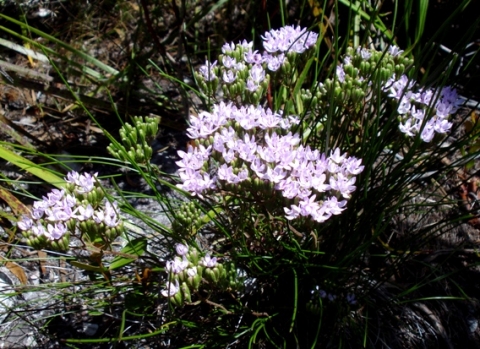 Corymbium africanum, commonly known as plampers or in Afrikaans heuningbossie (little honey bush), is a variable, clumped or tufted perennial that grows hairy stems to a height of about 30 cm. Both the colloquial names given here are also used for other plants, making the official scientific names useful for unambiguous identification.

The narrowly strap-shaped leaves are rough surfaced with parallel venation. There are tufts of woolly hairs at their bases of the leaf bases. The leaves become up to 20 cm long.

The species distribution is in the Western and Eastern Cape, ranging from the Cape Peninsula to the Cederberg and eastwards along the coast and inland to the Swartberg Mountains and the Langkloof. This plant was seen in the Fernkloof Nature Reserve at the end of October.

The habitat is sandstone slopes and flats among fynbos. The species is not considered to be threatened in its habitat early in the twenty first century (Manning, 2007; Bean and Johns, 2005; http://redlist.sanbi.org).