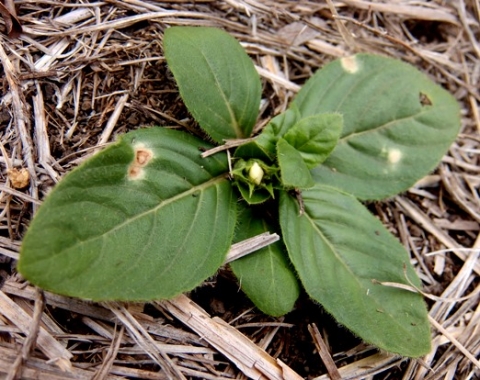 Crabbea acaulis is a dwarf, stemless perennial that grows ovate leaves in a basal rosette lying flat on the ground. The leaf tip tapers broadly or is occasionally rounded; the base also tapers to somewhat rounded.

Spaced, parallel lateral veins curve in from the midrib towards the margins, sunken on the upper surface. The midrib is conspicuous in its lower part, the leaf surface appearing slightly quilted around that part. The dark green leaves are hairy, conspicuously so on their margins that are entire.

The plant occurs in summer rainfall grassland from the Eastern Cape, through the Free State and KwaZulu-Natal to North West, Gauteng and Mpumalanga. The species is not considered to be threatened in its habitat early in the twenty first century (Van Wyk and Malan, 1997; www.redlist.sanbi.org).