Home » TYPES » Herbs » Corchorus asplenifolius
Back to Category Overview
Total images in all categories: 11,523
Total number of hits on all images: 6,605,235 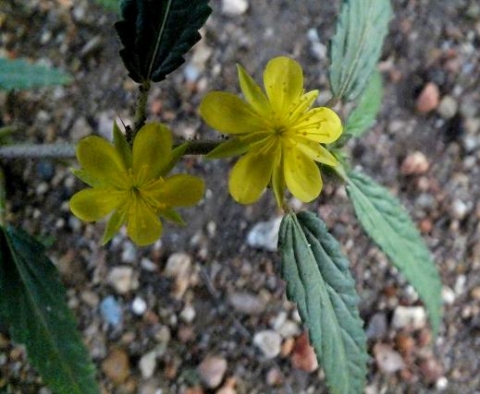 Corchorus asplenifolius is a perennial that grows prostrate, sometimes suberect stems from a woody rootstock. The stems are usually hairless or sometimes a line of curly hairs grow along one side of them.

The stalked, simple leaves are narrowly lance-shaped to almost linear. The blades are dark green with ascending veins sunken on the upper surface; the midrib sometimes whitish and conspicuous. The leaf margins are finely to coarsely toothed.

One to three flowers are borne in cyme-shaped inflorescences from leaf axils. The yellow flower has five, obovate petals with rounded tips, alternating with sharply pointed, narrow sepals, also yellow on top. The sepals are more concave above than the spreading petals. An ample cluster of stamens on long filaments and tiny globular anthers spreads over the flower centre.

Flowering happens in summer to all year round. The plant bears a pod-like capsule on a twisted or curved stalk.

The species has a wide but sparse distribution across South Africa excluding the Western and Eastern Cape, extending into southern Africa. The habitat is varied, mainly slightly wooded grassland. The species is not considered to be threatened in its habitat early in the twenty first century.

The plant is similar to C. confusus, the flower differences can be observed in this Album.

The plant's leaves are commonly eaten as a vegetable, prepared like spinach or marog, or added to porridge. Several Corchorus species like the African but non-South African plants C. tridens, C. trilocularis and C. olitorius are used like this (Van Wyk and Malan, 1997; Onderstall, 1996; Germishuizen and Fabian, 1982; Van Wyk and Gericke, 2000; Fox and Young, 1982; iNaturalist; http://redlist.sanbi.org).