Home » TYPES » Herbs » Commelina benghalensis
Back to Category Overview
Total images in all categories: 11,506
Total number of hits on all images: 6,515,925 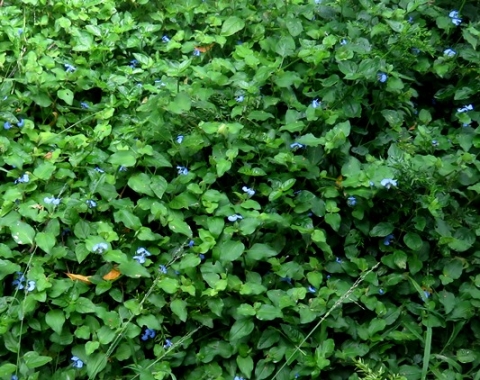 Commelina benghalensis, commonly the Benghal commelina or tropical spiderwort and in Afrikaans as blouselblommetjie (little (washing) blue flower), is a scrambling, spreading, semi-procumbent annual or perennial, a weed in many places, growing hairy stems up to 50 cm long in shady places.

The thin-rooted plant spreads from runners, rooting at stem-nodes. When invading, these plants are hard to destroy in cultivated areas, also on account of underground, seed-bearing capsules. The common name of wandering Jew is used for this and other, mostly related plants.

The leaves spiral up the stems and are ovate in shape. The leaf-tips are acutely or bluntly pointed, the margins entire, sometimes a little wavy. The leaf-base narrows abruptly into a sheathing petiole covered in long, red or whitish hairs and bristles at the sheath mouth. The shiny but pale, apple-green blades may have fine longitudinal lines or indentations. Leaf dimensions are up to about 8 cm long and 3 cm wide.

The species distribution is widespread, weed-like, all over southern Africa, tropical Africa and Asia. Introduced in the Americas, the plant's notorious spread has already earned it the dubious achievement there of making the Federal Noxious Weed List.

In South Africa C. benghalensis grows naturally in all nine provinces; in the Western Cape only near the eastern border, but also known as an introduced weed of cultivated fields and gardens further to the west. The photo was taken in the uncultivated part of Kirstenbosch under trees.

Only two blue-flowering Commelina taxons are recorded by Sanbi in the Western Cape, the other one being C. diffusa subsp. diffusa. The small, third petal of the plant in picture seems a little small, more narrowly ovate and pointed than on many confirmed C. benghalensis specimens, but it remained the closest, most likely fit that could be found.

The species habitat is subtropical and tropical warm and humid regions, typically in forests and grasslands. The species is not considered to be threatened in its habitat early in the twenty first century.

Plant parts are used in traditional medicine of different cultures, used in treatment of infertility, blood pressure, malaria and several other maladies. Human harvesting of plant parts exacerbate the seed dispersal of this weed. In South Africa the plant is sometimes eaten as a famine vegetable, a spinach equivalent. Bushbuck browse this plant (Pooley, 1998; Bond and Goldblatt, 1984; Bean and Johns, 2005; Leistner, (Ed.), 2000; iNaturalist; http://pza.sanbi.org; http://redlist.sanbi.org).