Home » TYPES » Herbs » Corchorus confusus
Back to Category Overview
Total images in all categories: 11,921
Total number of hits on all images: 7,168,538 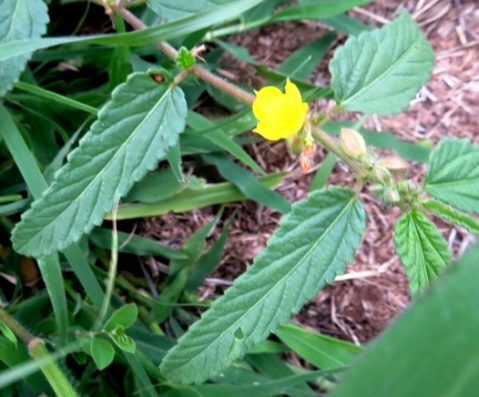 Corchorus confusus, in Zulu commonly called ungibonisele (probably meaning give me light), is a herb bearing lowly spreading or prostrate branches from a woody rootstock. The Corchorus genus of the Malvaceae or hibiscus family used to form part of Tiliaceae, the linden and jute family.

The branches are covered in bristles, at least when young. The alternate leaves on short stalks are lance-shaped with rounded to acutely pointed tips. The margins are scalloped or toothed.

The pale leaf midrib is prominent on both surfaces, the acutely ascending lateral veins sunken on the upper surface do not quite reach the margins. Three veins emerge from the leaf base, the midrib the central one; the lateral pair has notable secondary veins emerging from them on the outside.

The species is distributed in the northeast of South Africa in KwaZulu-Natal, Mpumalanga, Gauteng and Limpopo. It also occurs in Swaziland, Zimbabwe and further in Africa.

The habitat is grassland and bushveld, the plants mainly growing on rocky ridges. The species is not considered to be threatened in its habitat early in the twenty first century.

There is a similar species, C. asplenifolius, found in largely the same distribution, differing in its stems lacking bristles or hairs, although a line of curly hairs may be present on one side of the stem. It also differs in its fruit stalk being twisted or curved, rather than straight.

The specific name confusus is a Latin word meaning confused, disorderly or troubled. It is not clear whether this name was chosen on account of some attribute observed in the plant or describing the meeting of botanical experts at which the name was decided. Maybe confusion regarding the plant's identity brought it on, particularly distinguishing between the two species mentioned here (Van Wyk and Malan, 1997; iSpot; http://redlist.sanbi.org).