Home » TYPES » Herbs » Commelina benghalensis flower
Back to Category Overview
Total images in all categories: 11,921
Total number of hits on all images: 7,169,420 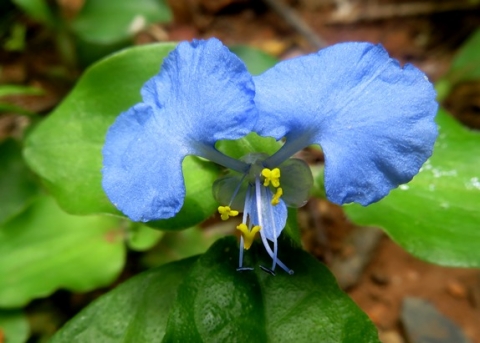 The small, deep to pale blue flower of Commelina benghalensis is seen mostly during the morning for its brief flowering.

Three grey-white, translucent sepals are small at the flower base, two of them similar, as in the case of the petals. The flower has two, broad and elaborately rounded petals on long claws, opposite the small, ovate, sessile third one. The flower is about 1 cm long and 1,5 cm wide.

Three stamens in picture are yellow-anthered and similar with lobed anthers, a fourth larger-anthered, also yellow. The other two are sterile staminodes, their failed anthers dark blue and deformed. The filaments of all six are smooth.

The thick, fleshy style is long and simple, topped by the tiny stigma. The small, superior ovary is pale and globular, visible at the style base.

Flowering happens mostly from late spring to midautumn, but this season may extend to almost all year round; lowest in midwinter.