Home » TYPES » Herbs » Commelina erecta
Back to Category Overview
Total images in all categories: 11,506
Total number of hits on all images: 6,503,431 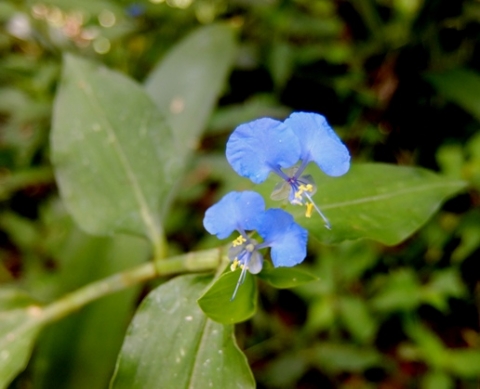 The species distribution is along the Eastern Cape and KwaZulu-Natal coast and inland north of the Vaal River in Mpumalanga, northern Gauteng, North West and Limpopo. Beyond the border the species is found in the tropics to Kenya, Ethiopia and Eritrea, as well as in the Americas, Australia and Asia.

The habitat range in southern Africa is moist grassland, scrub veld and open woodland at altitudes from near sea level to 1530 m, often in sandy soil. The species, so widely distributed, is not considered to be threatened in habitat early in the twenty first century (Manning, 2009; Van Wyk and Malan, 1997; Pooley, 1998; Blundell, 1992; http://redlist.sanbi.org).