Home » GENERA Q-S » Stachys » Stachys cuneata flower
Back to Category Overview
Total images in all categories: 11,894
Total number of hits on all images: 7,136,488 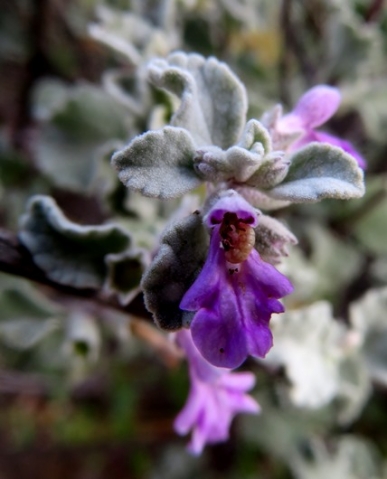 The full-frontal flower view of Stachys cuneata shows a foreign object inside its corolla. It is probably the fat larva of some insect lying to the right of centre.

The upper lip of the flower is caught by the camera directly from above, showing it as almost absent and in two parts.

The profile view of the flower shown in another photo in this Album tells a different story. In that photo of the same flower (the larva acting as marker), the upper lip is quite large. More flowers, faintly visible in the background here, give an idea of the upper lip shape.

This lower lip is notched in the centre of its rounded tip and channelled in its basal part. Faint veining is visible along its surface. The lateral lobes of the lower lip are smaller, like stubby arms.

The plant was seen next to the main north-south road in Namaqualand during August, well to the west of the normal distribution of the species (Shearing and Van Heerden, 2008; iNaturalist).