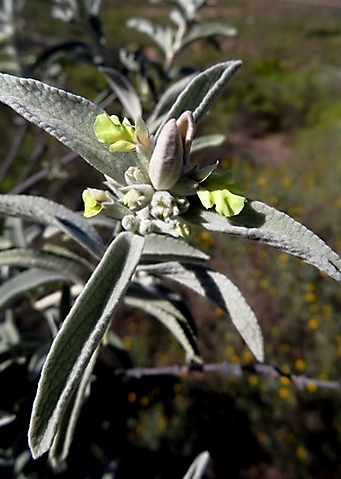 Stachys is a large genus in the Lamiaceae or mint family, consisting of annual and perennial herbs, as well as undershrubs and some shrubs. The plants are commonly known as woundworts and in Afrikaans as teebosse (tea bushes). The generic name, Stachys, is a Greek word meaning an ear of grain, referring to the inflorescence that is mostly spike-shaped.

Various hairy coverings are usually present on most parts of these plants. The leaves are simple and opposite, varying in width, sometimes stalked and often toothed.

The usually spike-like inflorescences (sometimes panicles), are terminal (at stem-tips) or axillary (from leaf axils), the flowers usually produced in spaced whorls of two or more. There are usually leaf-like bracts, smaller than the leaves, as well as linear bracteoles present below the flowers. The calyx is either unequally five-lobed or two-lipped, the lobes shorter than the tube.

The corolla is two-lipped above a straight or curved tube, usually with a hairy ring inside the base. Flower colours are often white or purple. The upper lip is erect or angled, usually concave, arched, sometimes notched and shorter than the lower one. The lower lip spreads or is bent down and three-lobed, the central one biggest.

Four stamens in two unequal pairs ascend under the upper lip, the longer pair usually exserted. The cylindrical style is about as long as the taller stamens, its tip bilobed.

The fruits are oblong to ovoid nutlets, often three-angled.

There are about 400 Stachys species in subtropical and temperate regions worldwide, 42 of them in southern Africa. The leaves of some species, such as Stachys thunbergii, are or have been used in traditional medicine, as the woundwort name indicates. These plants are often food to butterflies and moths.