Home » GENERA Q-S » Stachys » Stachys rugosa flower
Back to Category Overview
Total images in all categories: 11,894
Total number of hits on all images: 7,136,486 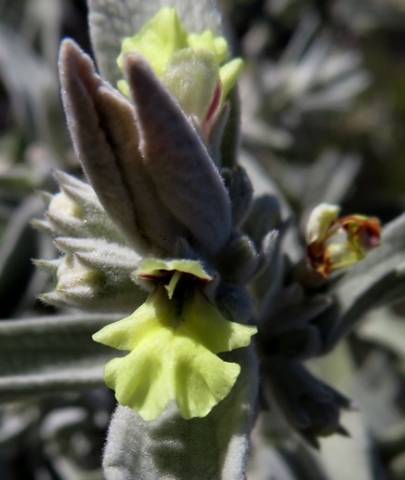 The stalkless flower of this grey-leaved Stachys rugosa has five grey, hairy and acutely pointed sepals. The sepals protrude erectly (for a part of the budding period at least), not remaining folded around the furled corolla of the bud until anthesis (the open flower stage).

The flower is two-lipped, the upper lip small and shallowly two-lobed. These rounded lobes appear hairy on their outer surfaces and margins. The lower lip is large and three-lobed, the central one rounded with uneven, undulating blade, pale cream in colour. The corolla tube is short and dark inside, some maroon showing on the inside of the upper lip.

A pair of young, stem-tip leaves is erect above the many-flowered inflorescence before they mature, spread and curve down (Le Roux, et al, 2005; Manning and Goldblatt, 1997; iNaturalist).