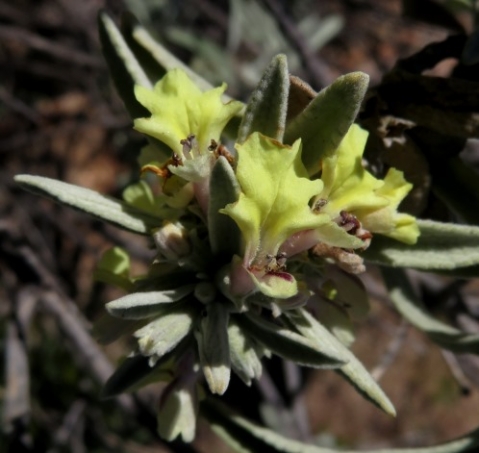 The inflorescence of Stachys rugosa consists of few-flowered clusters, possibly cymes, emerging from upper leaf axils. The stem-tip appears as if it has recently branched, the flowers and leaves a dense mass.

The two-lipped corollas are white on the small upper lip and at the base of the lower one. The raggedly lobed lower lip is for the rest cream to lemon-yellow. The lateral margins of the upper lip in picture are lined in dark purple. Flower colour may also be pink, mauve or purple.

Two of the four anthers are exserted, the filaments united. The style is slightly exserted, ending in two stigma branches. The photo was taken in August (Le Roux, et al, 2005; Manning and Goldblatt, 1997; iNaturalist).