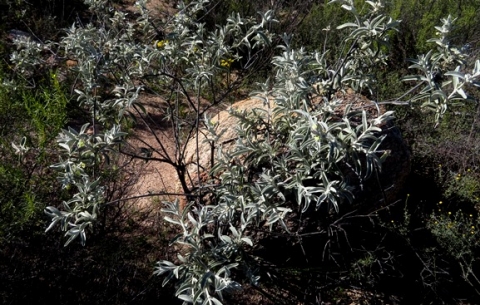 Stachys rugosa, in Afrikaans commonly known as boesmantee (Bushman or San tea) or as Karootee (Karoo tea), is a grey-felted shrub reaching heights from 75 cm to 1,5 m. The shrub branches from the base and higher up, the woody old stems bare. The bark is greyer than the leaves that drop off early, mainly remaining clustered near the stem-tips.

The species distribution is in the Northern Cape, the Western Cape, the Eastern Cape and the Free State, as well as in Namibia and Lesotho. The photo was taken near Naries, west of Springbok.

The habitat is dolerite and clay outcrops. The species is not considered to be threatened in its habitat early in the twenty first century (Le Roux, et al, 2005; Manning and Goldblatt, 1997; iNaturalist; http://redlist.sanbi.org).