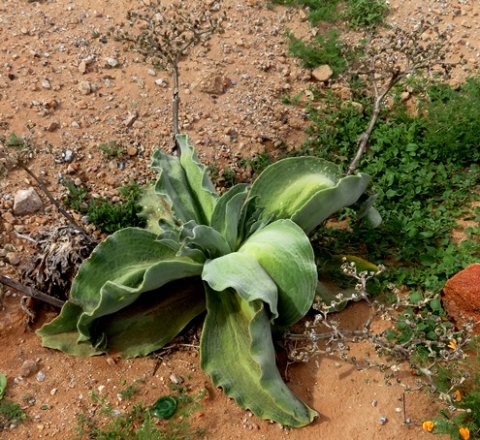 Previous
Image 1 of 42
Next

The unusually large leaves for its family, Aizoaceae, and even for its genus, are sessile, i.e. stalkless. Triangular in shape, the leaves curve or fold in along the midrib into a boat-shape. The margins are entire and variably wavy. The thick, blue-green blades are covered in small, rounded water cells.

M. barklyi is a Northern Cape and Namibian plant, common along the Namaqualand coastal plain and elsewhere in the region, from the Richtersveld to Hondeklip Bay. The photo was taken along the road between Springbok and Steinkopf.

The plant grows in sandy soils in the arid and winter rain conditions known in these parts. The species is not considered to be threatened in its habitat early in the twenty first century (Le Roux, et al, 2005; Eliovson, 1990; iNaturalist; http://redlist.sanbi.org).