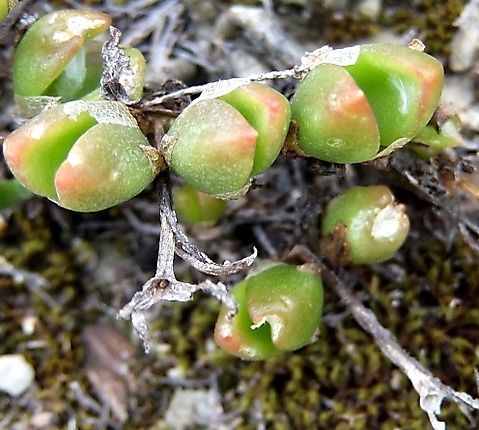 Mesembryanthemum is a genus of leaf succulents in the Aizoaceae family.

The generic name, originally spelt Mesembrianthemum, is derived from the Greek words mesos meaning middle, embryon meaning ovary and anthemon meaning flower, referring to the position of the ovary. Another explanation is derived from the Greek mesembria meaning midday and anthemon, alluding to the middle of the day flower opening, common in the genus.

The annual and (larger) perennial plants are prostrate and creeping, decumbent or erect, their rootstocks not thickened. The herbaceous stems are cylindrical, angular or winged.

The leaves are decussate or alternate, sometimes both forms growing on the same plant, the upper leaves or those near the flowers alternate. Leaf-shape is flat and large, tapering to petioles in some species, or cylindrical, club-shaped or even globular.

Glistening water cells or bladder cells are usually present upon the leaf surfaces. These cells are big, small or flattened. Some species have wavy leaf margins while the bases of those growing in pairs are sometimes fused.

The flowers are usually clustered, less common solitary, opening in daylight and strongly in sunlight. There are five sepals below each flower, two of which are leaf-like. The numerous petals are free or united at the base in a tube. Petal colours are mostly white, yellow or pink.

The stamens, and in some cases also staminodes, grow from the corolla tube. The nectary in the flower base consists of five grooves, varying in depth across the different species. The ovary is semi-inferior, mostly with five, erect, thread-like styles on top, found in the flower base ringed by the petals.

Most species flower in spring or summer.

The fruit is a five-locular capsule with valve wings but without covering membranes. The membranous-winged valves open the ripe capsules when wet, optimising the dispersal time of the seeds. The variously coloured seeds are triangular or D-shaped and rough or smooth-surfaced.

Linnaeus had the Mesembryanthemum name listed as a widely diverse genus in the middle of the 18th century, including known Aizoaceae species of his time. As knowledge about the plants grew over the years, much reclassification of the Aizoaceae family took place and the Mesembryanthemum generic name became restricted to about 15 large-leaved, fleshy herbs. Recent additions have again increased the genus, by now to about 108 species and that number is probably still unstable.

The geographical distribution of the plants is coastal in temperate regions in Africa, the Americas, southern Europe, Asia Minor and Australia. Some of the plants are widely used in horticulture as ornamentals.