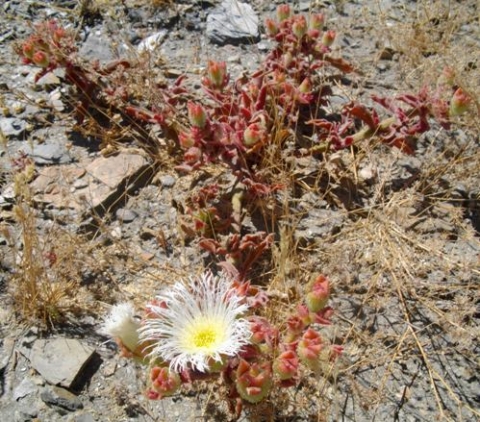 The angular stems of Mesembryanthemum guerichianum can be used as an indicator for distinguishing the plant from M. crystallinum that has cylindrical stems. The white flowers of M. guerichianum are also larger.

This plant is often well represented in disturbed spots on low lying flats and certain low termite mounds where loam soil occurs. The plant in picture grows in a stony, sandy place with bare patches. Plant succulence allows it to produce many flowers here in October, while surrounding annuals are already succumbing to the heat of the Rooiberg, east of Van Wyksdorp.

When it becomes cooler during the rainy season, the leaves of this mesemb will be greener, looking more like salad as suggested by the common name, brakslaai (Smith, et al, 1998; Vlok and Schutte-Vlok, 2010).