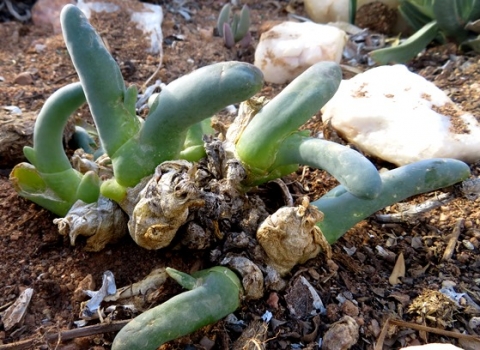 Previous
Image 9 of 42
Next

Mesembryanthemum digitatum, commonly in Afrikaans the duim-en-vinger (thumb and finger) or vingerkanna (finger mesemb) and previously Dactylopsis digitata, is a variable, clump-forming leaf succulent reaching heights from 10 cm to 20 cm. The plant is thick-rooted, its branches short.

The thumb and finger association is caused by the parts of the angled-up, cylindrical leaf-pair being of unequal length, resembling that part of a human hand with the two, sometimes three digits erect. The leaf skins are smooth, lacking water cells. In the USA garden world the plant is known as the hitchhiker.

The silvery grey skins or sheaths of desiccated leaves persist during the dry summer, serving as protection over live stem parts below new leaves.

After winter growth a small white flower is produced from the slit between the two leaves. The solitary, stalkless flower becomes 1 cm to 2 cm in diameter, its petals hard. The flower stays open day and night, sometimes for longer than three weeks before it withers. The fruit capsule that follows has five locules.

The species comprising two subspecies is endemic to a part of the Knersvlakte in the north of the Western Cape, particularly the Vanrhynsdorp to Vredendal region between the Olifants River and Bocklandsberg, northwards to Bitterfontein.

The plants grow in a habitat of exposed shale plains among white quartzite pebbles. The species is not considered to be threatened in its habitat early in the twenty first century.