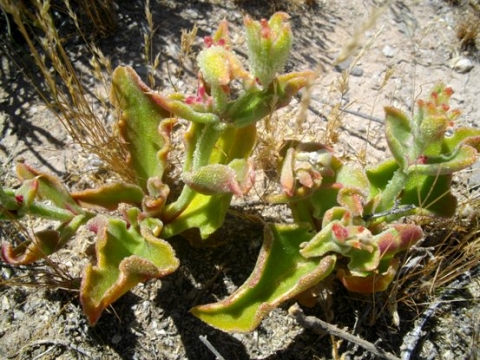 Mesembryanthemum guerichianum, known in Afrikaans as brakslaai (brackish or saline salad), belongs to a group of species commonly called iceplants. Large, glistening surface cells, called bladder cells cover the leaves, stems and calyces. This is a succulent herb of the Aizoaceae family. The large leaves are thickly fleshy, green with red patches, wavy along their margins.

There are five sepals below the corolla of every flower, around the whorls of petals. The fruit capsules to follow will also have five locules. The flowers appear from midspring to early summer.

The plant is distributed widely in nature, found growing from Angola down the west coast across Namibia and Namaqualand to the Karoo and Little Karoo into the Eastern Cape (Vlok and Schutte-Vlok, 2010).